I landed in Madrid at close to midnight. The heat was palpable and was felt like it penetrated my brain. I was however being comforted with the idea that I will be transported in an airconditioned shuttle bus that I arranged with VIATOR (https://www.viator.com/tours/Madrid/Madrid-Airport-Arrival-Shuttle-Transfer/d566-3864MADAPTHTL). The Viator ad has the following assurance to anyone who will book this service:

After your plane touches down in Madrid, simply greet your courteous driver in the arrivals lounge and climb aboard your comfortable, air-conditioned vehicle, Relax during the journey to your accommodation in Madrid and feel relieved to have avoided the hassle of car rental and crowded taxi ranks. Simply enter your details when you book, pay in advance, and then present your driver with your voucher on arrival. The service is available 24 hours a day, 7 days a week, so it doesn’t matter what time your flight arrives.

I went to the designated meeting place but the shuttle service cannot be found, even with the help of airport personnel and other shuttle service drivers. After about almost an hour of going up and down the airport, frustrated, stressed and angry, I finally gave up and took a taxi to the Airbnb I have booked on line. Up to this time, even after repeated requests, Viator has refused to give me a refund.

The taxi deposited me infront of the building in the Atocha area where the Airbnb was supposed to be. I was confronted with a massive wooden door that resembles the door of a warehouse. There was no doorbell in sight. There was smaller door close to the massive one and I could tell that the wooden door and the small door shared one hallway. I called the phone number that was included in the confirmation that I got on the mail but it went to voicemail with the message that it would reply during business hours. I kept calling the same number hoping that a miracle would happen, someone would answer. There were few people walking by at this hour, at my estimate around half past one Madrid time. No one paid any attention to a guy (me)who had backpack and a luggage sitting on small curb of a semi darkened and narrow street, (as most ancient streets in Spain are quite narrow). There were two people talking nearby and when one of them left, the other, a Japanese woman, started picking up some cardboard boxes near the big door. She looked at me and addressed me in perfect Spanish. I shrugged and indicated I spoke English only. She spoke in halting English but clear enough to be understood. She tried to help by trying to identify the name of the Airbnb host. We talked a bit and she disclosed that she has been living in Spain for 7 years and was moving to another city. When other people walked by, she engaged them and asked for their help. This went on for about 30 to 40 minutes until I decided to look for a hotel. The Japanese woman gave me some directions how to find a hotel nearby and she had both fingers crossed for me when I bid her goodbye.

I slung my backpack on my back that weighed around 25 pounds. The handles  would chafe the skin of my arm when I struggle to put my arm around the handles. By now, both arms were full of cuts and bruises that stung from the perspiration induced by the Madrid heat. As the sidewalk around Madrid are hardly smooth, the wheels of my luggage hitting the uneven surface of the cobbled sidewalk created a staccato beat that bounced against the walls of the buildings I passed as I walked on. I saw a hotel sign a block away and hurried towards it. The hotel door was closed and would not open and there was not a single soul on sight. I knocked several times but no one came to answer the door. I left, feeling frustrated. Five, Six, Seven blocks, I stopped counting, before I saw another hotel sign. An older man was attending but he would not open the door. He kept waving and gesturing and I finally understood that he meant to convey that the hotel is full. I walked away, not knowing if I will have a place to lay down my weary self. I simply kept walking with my luggage still making that awful sound. The only hope I had was that the wheels would not give out otherwise I would have to carry another heavy load on top of the backpack that felt like I carried the world and had a burden like the Titan Atlas who

was doomed by Zeus to carry the heavens on his shoulders for eternity. After so much walking, I ended up on a wider busy street. Then there was the Nacional Hotel. I walked in not caring how much it would cost me. The room was beautiful, air conditioned, sheets that were soft and smelled fresh and a bed that felt like the mattress was made of goose feathers.

I showered then fired angry emails to Airbnb and to the host who wondered where I am. He replied that I should have knocked on the huge and thick wooden door. So I was suppose to  know that and expose my bare knuckles to some rigorous rapping. I went to bed but I could hardly fall asleep. Sleep must have crept on me that when I opened my eyes,  daylight filtered through the heavy drapes. I got myself presentable and went to talk to the front desk people. English was a foreign language to them that they are unable to utter a word of it. I was directed through a series of hand movements, gestures and numerous kind of facial expressions to where breakfast was being served. I entered a nice dining area where a man in uniform looked at me with suspicion reserved for ex-cons. He asked in Spanish my room number and I showed him the key card and the look of suspicion vanished away. There was a great array of food to be had and I was the only person there that wore a pair of shorts and T-shirt. Everyone looked at me with suspicion reserved for ex-cons. Apparently, breakfast was not free. It cost me 27 Euros.

I went back to my room after breakfast and stepped out of the balcony.  I then realized I was looking at the Real Jardin Botanico 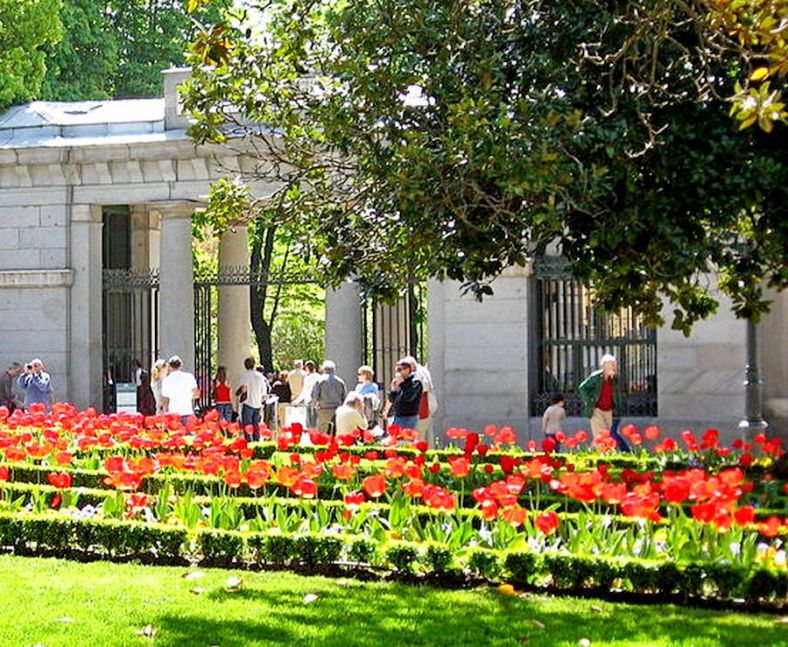 and next to it is the Parque del Retiro. Just below me is the Paseo Del Prado. I must have walked at least three kilometers last night.

As I remember from 30 years ago, the Prado National Museum could not be that far. The Prado Museum houses the most extensive works of Francisco Goya whose central theme are mostly religious. Diego Velasquez, another Spanish artist,  is also featured at the Prado. Among other works included Titian, Ruebens and El Greco. A few blocks from the Prado would be Museo Thyssen-Bornemisza and the Museo Centro De Arte Reina Sofia. Of special interested at the Museo Thyssen-Bornemisza is the Baroque Artist Francisco De Zurbaran. His paintings are mainly religious as well. I was more interested in the artistic value of his work rather than then its religious importance. Of greater interest for the Museo Centro De Arte Reina Sofia are the two famous Spanish Artist of the modern age, Joan Miro, Salvador Dali and Pablo Picasso. Picasso`s Guernica appears to be permanently enshrined at the Reina Sofia which I had my heart at viewing. These three world renowned Art Museums comprises of the Golden Triangle of Art. For me, the Paseo is literally a walk in Art History.

(Please be forewarned, the photographs above are not mine. I have taken numerous pictures of Madrid with my cellphone but it was unfortunately stolen.)

I wanted to jump out of the hotel right away and start checking out these three museums. I came with a Spanish lady friend Margo to Madrid many years ago but we did not have the opportunity to look around. Margo was a friend from the university and we bonded well as good friends. Our trip to Spain was of different nature and I was there to assist her. As that was her story, I could not share it here.

For now, before I could indulge myself with art, I had to check out of the hotel and head down to the new place that Airbnb had found for me.